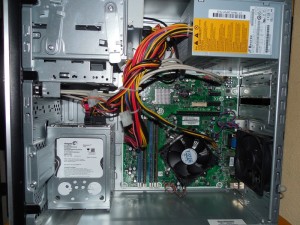 My company moved locations and in the early stages, while at the old building, the IT Department got rid of what it considered e-waste, allowing employees to take what they wanted that was out on a desk area.

I blew out all of the dust bunnies and cleaned up the cables and contacts. For the computer that had no RAM or HDD, I installed both 4GB of DDR3 ( 2 x 2GB) and a 500GB HDD I kept from an older computer and it fired up. I installed Linux (Mint) on it and couldn’t be happier. I will sell the 4GB box to a kid down the street who has expressed interest and keep the other one.