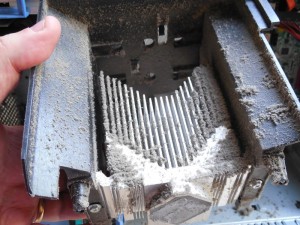 Famous words – “It was working fine and then just stopped and I don’t know why”. Well big sigh.

I opened up the computer and large clumps of dust bunnies basically fell out of it. After blowing them out and the other matter collected all over the inside it fired up just fine into – blah – Windows XP. In running some diagnostics I found that the HDD was failing and going bad so I backed up the file data, changed it out for a 500 GB I had laying around and installed Windows 7.

Although I changed it out I kept getting the same HDD failing error so on face value it appeared the issue was more with the I/O of the motherboard but I needed to follow through with a process of deduction. I changed the SATA cable out to make its not bad and even tried booting from a different SATA port but the same issue occurred. I tried another HDD and got the same thing.

The chances of all three HDD’s being bad is hardly likely so I decided to simply ignore the error and continue installing Windows 7. I completed the installation of Windows 7, its plethora of updates and all is functioning correctly. I cant do anything about the failing I/O of the motherboard so our friend will need to make the decision of a replacement board or just upgrade to a newer PC. For now its up and running.