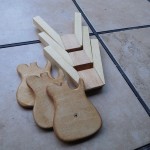 I made a couple of guitar hangers (inspired by Brodafin’s YouTube channel) for my creations within the things I was doing this Memorial Day weekend.

Not having a band saw, I drew out the first one, held the three pieces of wood together in a vice and then used a hand scroll saw to rough cut just outside the boundary of the guitar drawing. After that I held them together with a clamp and used a hand rasp and heavy grit sandpaper to finish the shaping.

It was rather meticulous and took me several hours. A glutton for punishment I guess but I could at least brag about the sweat that went into making them. Anyone can use a band saw but not everyone works in the 90 percent range with just hand tools let alone have the patience for that.

So once I was done working on each guitar backing I rounded the edges a bit, sanded them with some light grit 220 and gave them a bit of stain. A bit darker on the guitar backings and lighter on the holder pegs. I may change the holder pegs though as I am bending towards not liking how much of an angle I used. It was as the Brodafin’s plans though. Anyways, I cant wait to finish them up a bit and install them.