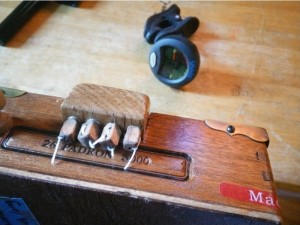 I use a variety of both nylon as well as steel/bronze strings in my ukulele and guitar builds and at times wanted a more exotic, yet still quick, way of tying strings.

Most often I use whats called a floating bridge, not really conventional, and when using a through-neck design on my builds the holes are often drilled through the tail end of the neck.

Well, I have hangers on my wall for one of my guitars and a ukulele and happened to glance up and see the G string broke. Probably a joke in there somewhere but anyway, there was a bit of string left but not enough for me to back it up and restring it.

I headed out and a few blocks down the way to Guitar Center and they had nothing but Soprano and Concert size strings and then down to Old Town Music in downtown Pasadena but the three story garage for free parking was closed. That pissed me off so I went back home. I ended up calling them but they had none in stock either. Like what the hell?!

I decided to just order on Amazon since I had some credit. In cruising around Amazon looking for replacement Tenor strings to order I came across an item called a string-tie bead that lets you quickly tie off the string and they sometimes increased intonation. Being intrigued, I looked into them further and found that these little rectangular, and round, time-savers are made out of a variety of substances such as plastic, stone and wood.

I thought well heck, I can make those. After about a half hour of research I sat down with my Dremel, pull saw and some dark stain and made a few out of some scrap maple wood I had to try out. Needless to say I was not disappointed in their use.

I was able to salvage the existing string and used the other beads on the existing strings. After re-tuning the strings, my ukulele actually sounded a tad bit louder and cleaner, the sound resonating better through the box. I ordered strings on Amazon anyway since they are so much of a hassle to pin down anywhere.