I downloaded the latest image of Ubuntu 10.10 (with Unity) and created a bootable USB with it using the donation-ware InfraRecorder. Again, I wrote the image to a 4GB USB drive but didn’t need that much space, I only have 4GB and 8GB flash drives. I booted from the USB flashdrive and like what I see. 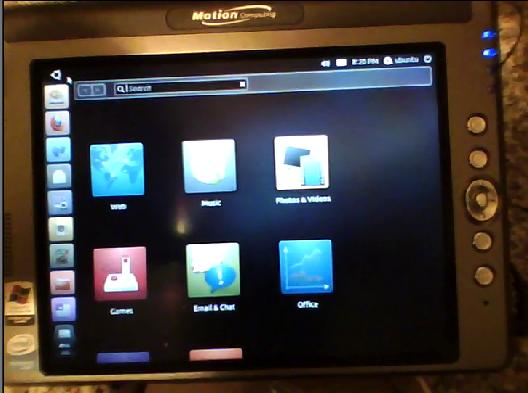 Not only is Ubuntu 10.10 responsive on the LS800 it is Wacom compatible as I can navigate around with the tablets pen. I can also still use a mouse and keyboard but the whole idea with installing Ubuntu is so I can get away from having to do that.

Caveat(s) – Some of the application icons in the left toolbar do not fire off after they have been tapped on but do from Ubuntu’s application area. The Applications icon does work when tapped on with the LS800’s pen. With Firefox, it did not initially work to launch the browser until I delete its application icon from the toolbar and then recreated it. I could then launch Firefox just fine.

Second caveat, under installed applications it shows a virtual keyboard as having been installed but I cannot find anywhere to tap on it in Ubuntu so I have no use of a virtual keyboard. I have a couple lined up to try as I am really liking Ubuntu or I might make my own. I have a video of Ubuntu running I will post that soon.