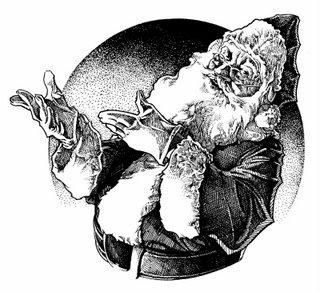 I was just reading this story on MSN about a teacher who told his black student who showed up dressed as Santa that Santa Claus is white. Over the years I recall reading similar stories from around the country. On its own, the reduction of ethics, and common sense, among a lot of teachers is quite appalling.

I have family members who are, or have been, teachers and can solidly vouch for their integrity but there is not a week gone by that strengthens my overall outlook that the integrity of teachers is going down the shitter with reports of sexual misconduct, accepting bribes and sex for good grades, abuse or other misconduct, abusing children with autism, and even racism. All-in-all I dare say that these teachers have themselves become the bully’s. It is no wonder parents are electing for home schooling rather than expose their kids to that.

Enough of that rant. So, getting down to it, is Santa Clause black, is he white, does he carry an ethnic background at all? The answer to one of those is certainly yes. There is quite a bit of history to the founding of Christmas but I will start with how the image of Santa historically came about, that I know of.

The modern image of Santa Claus is actually derived from the Dutch figure of Sinterklaas which also is linked to the creative tales associated with the historical figure of Christian bishop and gift-giver Saint Nicholas. Over time, character traits from tales and folklore are how the character of Father Christmas merged to form the modern Santa Claus known today. It wasn’t until the 1881 illustration by Thomas Nast whom with the help of Clement Clarke Moore helped to create the modern image of Santa Claus, which over time still continued to change a bit. Before that the jolly old fat man did not exist as the Christmas idol we have all come to know year by year. I urge anyone interested to research on their own starting with this great wiki on Wikipedia’s website.

So what the heck happened to Christmas? Most don’t even know St. Nick was an actual Saint let alone who Sinterklaas, Nast or Moore was, or that the jolly old fat dude really stands for the spirit of Christmas. Unfortunately, Santa is now the idol representative of a yearly commercial enterprise that lures people into stores with snake-charmer like abilities to buy things for friends, family and other loved-ones regardless of if they can afford them. These days I at times will jokingly say to people to have a “Merry Commercialized Christmas” and they sort of look at me funny but I can tell they know what I mean.

Yes, I’m no exception to buying anything at Christmas time but it’s for our kids really. I exercise the commercial aspect of it with my kids still as custom dictates so don’t get me wrong but my wife and I instill in them every year what Christmas truly means. It’s not all about the gifts you receive but it’s about the spirit of Christmas – family, health, religion, praying and giving thanks for what we have and for goodwill to everyone. We may buy a gift card to a restaurant or a food gift basket for someone, but I lack psychic abilities otherwise in knowing what someone actually “wants” for Christmas.

As a kid I was brought up as anyone else believing in Santa, wanting toys and candy, waking up that Christmas morning to see what Santa brought. As I got older I learned more and more what it meant. I recall when I learned that Santa didn’t exist at all and I really didn’t mind. I was watching Santa Conquers the Martians, made the same year I was born but watching it like seven years or so later.

So, black, white, ethnic background? I would say that Santa Claus represents all of the above. He is of all ethnic persuasions being that Santa is supposed to represent the Spirit of Christmas, that aspect of giving, love, happiness and joy. So the black kid going to school dressed as Santa – more power to that young man and anyone else, regardless of race, color and creed, that want to suit up and spread good cheer! As for that teacher – “You’re a mean one, Mr. Grinch………”

THE HISTORY OF SANTA CLAUS
http://www.northpolesantaclaus.com/santahistory.htm

The History and Origins of Santa Claus
http://www.patheos.com/blogs/panmankey/2013/12/the-history-and-origins-of-santa-claus/