I got tired of waiting for Android Lollipop to become available for my Nexus 7 (2012) so decided to grab the factory image and flash it myself. I was pleasantly surprised at how easy this was to accomplish and so far I have not had any issues with Android 5.0. I even dare say that it seems faster than KitKat 4.4.4. I will run a Geekbench on it at some point.

First I downloaded the Android SDK and unzipped it to the root of my D: drive. I chose this location because it has been my experience that the folders run a bit deep and Windows Explorer will eventually bomb out on copying files. Unzipping to the root folder keeps the character count and folder names to a minimum. 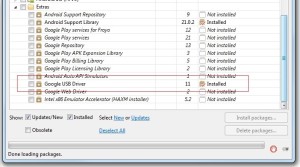 Once unzipped, I ran the SDK Manager under the root of the adt-bundle-windows-x86_64-20140702 folder, the folder name as of version currently available.

In the SDK Manager, I left what was currently checked, scrolled down to Extras, checked the box for Google USB Driver and clicked to install the packages.

When the packages were finished installing, I needed to install the Android USB driver on my system with Windows 7 Professional.

There is a guide for installing the Google USB driver on the various platforms of Windows here.

Next I downloaded the factory image from Android Nexus images page under Factory Images “nakasi” for Nexus 7 (Wi-Fi) and then 5.0 (LRX21P) and unzipped it to the root of my D: drive (D:\nakasi-lrx21p-factory-93daa4d3) as well. 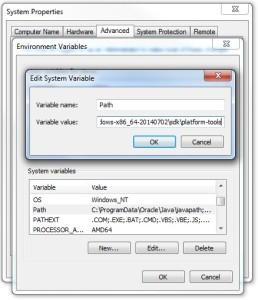 Now, I needed to start my Nexus in fastboot mode and opted to use the keys on the tablet rather than the adb tool in the Android SDK.

I know I’m going to use that tool later and opted to enter its folder location in my PATH system variable so I can run adb commands no matter what folder I was in.

I powered off my Nexus 7 and then pressed the volume up/down and power buttons at the same time until I saw the fastboot screen.

Opening a command console (CMD) as administrator on my computer I typed in the command to unlock the boot loader (This erases all data on the device):

I could see the confirmation on my Nexus 7 and saw the red text at lower left reflected it is now unlocked.

Next, in the command console window I navigated to the system image directory I unzipped earlier (for me D:\nakasi-lrx21p-factory-93daa4d3\nakasi-lrx21p) and typed the fast install command which started the flash process of the 5.0 image to my Nexus and waited out the process until it was done.

When the flash process is finished the command prompt will show to click any key to finish, the Nexus rebooted and I had a nice clean version of 5.0 Lollipop.

Before doing anything I re-locked the boot loader by turning off the tablet, booting to fastboot mode and from the command prompt issuing the command

The text at the lower left confirms the lock was successful.