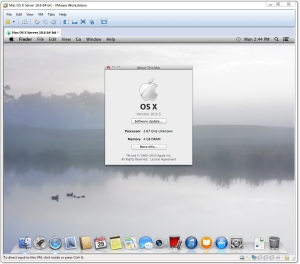 Not long ago my interest was peaked in learning OSX so I could become familiar in supporting the OS as well as learn OSX/iOS programming with XCode.

In my earlier years of work experience, back in the mid-90’s, working at Earthlink I had supported various versions of the Macintosh OS but the OS was not as developed as it is now. So I knew I had a learning curve to get over.

Not being super rich like most Apple users who could afford to purchase Mac Pro’s, Mac Mini’s, MacBook’s and the like, I had read quite a bit on building hackintosh systems but never gave it a go. I have a pair of Intel based machines not being used and might try that still.

Last year I stumbled on how to make a Macintosh VM in VMware so pursued the endeavor, eventually creating and using a Mountain Lion VM until I got comfortable enough to try updating to Mavericks once it was out. That epically failed so I knew I had to start out from scratch.

I did some research on the web and came across a couple of tech articles on installing Mavericks but settled on the guide from Sysprobs website since it was very forward to follow. I would need the install files from the Mavericks.app update on my Mountain Lion VM to accomplish creating an install disk so luckily i still had that.

The Sysprobs guide to installing Mavericks will take several hours to complete so make sure you have the time for it. All in all, the end result was a fully functional Mavericks VM that I could play around in and dabble with some programming.

The Mavericks VM will not be display friendly at first, being stuck at a lower resolution, so follow Sysprobs second article on installing a driver to add additional screen resolutions.

I can only attest that the instructions work and I have a functioning OSX Mavericks VM that I can use and learn with. If you follow the instructions you should also. The steps may equally work for Yosemite but I haven’t tried that yet. Soon though.