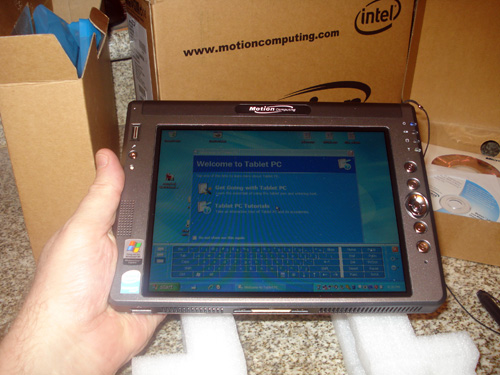 Well I just purchased an older Windows Tablet PC for just under $300, $269 to be exact, and I am ecstatic so far with what I have received. The LS800 is made by Motion Computing, an excellent tablet manufacturer for the Windows platform, and shipped to me brand new in the box, NOT refurbished.

I purchased it merely for a drawing tablet and with Android not being fully developed yet for tablets (not until at least Android version 3.1 or 3.5) and the iPad being so closed sourced and locked into the world of Apple, I wanted a Windows tablet since essentially I can run Windows or Ubuntu and use pretty much any USB peripheral of my choosing, including SD cards.

The operating system is Windows XP Tablet PC Edition but is Windows Vista capable. Understand that this tablet model was made between 2005 and 2007 but specs wise it still competes with lower budget present day laptops. The LS800 originally started in the high $2,000 range and in my eyes is still a damned good tablet.

The box contains the LS800 unit, power supply, pen, Quick Start guide, other paper propaganda, recovery CD’s (unit does not have a CD device though) and a tether – slash – lanyard for the pen.

Out of the box, I unwrapped the unit from its static-free bag and plugged it in, no mess no fuss. There was a quick first time Windows setup of around five minutes, if that, and then I was good to go. Now because it is Windows XP Tablet PC Edition, I automatically knew there were going to be a whole bunch of updates, 129 of them to be exact, but that was actually pretty tame compared to what Windows Vista and Windows 7 requires after a direct media disk install.

I chose not to update the device right away because I wanted to create an image of the hard drive and then put the LS800 through some performance tracing using Windows Performance Toolkit (WPT), an outstanding free performance measuring tool from Microsoft. I use WPT as an essential tool at work so I always carry the 32-bit and 64-bit version folders on my Lexar 8GB USB flash drive, no plug intended.

Backing up the Tablet

I use Acronis True Image for creating images of my systems and have decided to use it to create an image of the current Windows XP Tablet PC Edition SP2 system state. There are a few challenge though, 1) the tablet only has two USB 2.0 ports, 2) no built in CD/DVD recorder and 3) I have no external CD/DVD recorder to use so how to boot Acronis and backup the tablet?

In checking the system BIOS of the tablet I saw it can boot from external devices, so awesome, I can devise my plan! My solution was to create a USB boot media through Acronis and boot from that but Im going to need a mouse and also be able to use a keyboard. No problem as Acronis loads itself to RAM so I will be able to pull out the USB stick and plug in a keyboard when its time.

I chose to create the USB boot media from another computer that already had Acronis installed. I plugged in the external hard drive I will be saving the Acronis image of the tablet to, plugged in the USB flash device with Acronis and rebooted. Acronis started and I navigated through the menus until the buttons from the tablet would not work for navigating further.

I unplugged the USB flash device and plugged in a USB keyboard in its place. After waiting a few seconds I was able to utilize the keyboard. What LS800 documentation or the Motion Computing knowledgebase fail to mention that when you use a keyboard you can click on F10 which causes a mouse menu icon to appear at the lower left, this allows you to use the 5-way navigation button for moving the mouse pointer. This allowed me to finish the Acronis menus, type in what I had to using the keyboard and create an image of the tablet.

Once the image creation process completed I started my first run of Microsoft Windows Performance Toolkit.

This system will pretty much be my long term proof of concept for Windows performance and how Windows PC tune-up software can enhance and breathe new life into older systems. If older systems can continue to find a functional place in society then this will lessen the need for their dustruction, recycle them back into use and assist in further cleaning up our environment.