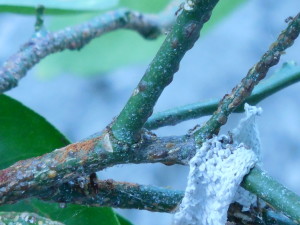 So I was looking at my midget lemon tree and saw a bunch of clumps of stuff on several branches as well as noticed that there was a lot of ant activity. I looked more closely at the branches and thought perhaps they were aphid eggs so I did a little research and found that was exactly what they were.

The ants were essentially taking care of them but in a weird sort of way. The ants stroke the aphids with their antennae and that causes the aphids to excrete  honeydew, which is a digestive by-product. At some point the aphids made it to the midget tree first and excreted honeydew which drew in the ants.

Still, I hate it. I am now trying non-pesticide ways of getting rid of the ants and drying up the aphids. I may just net off the tree and stick a bunch of lady bugs in there. Lady Bugs are an aphids worst nightmare.

Today I tried spraying white vinegar and sprinkled cinnamon, which ants are supposed to not like. If that doesn’t work I will try corn meal. They will supposedly take it into the colony, eat it and when they take in moisture the cornmeal will swell and essentially kill them by bloating.

I will non-shamelessly plug my 18MP Nikon Coolpix L620 that I took the above picture with in this post. I don’t normally upload higher MP graphic images but click to view if interested in seeing aphids and ants a little close up. Its not macor but still well enough to see.